We’re talking crossfit, kickboxing, bootcamp, Bootoga™, lifting, running “hard.” I’ve raced in triathlons and 10Ks and half marathons and mudruns…just this past April I finished Spartan Stadium Sprint in under an hour WITH a busted up shin from missing a box jump. I’m strong.

The fact is I’ve spent pretty much my entire life being overweight, so it’s not generally an ‘in your face’ kind of an issue, but it is like a low frequency buzz that I can’t ever quite escape. When I meet new people, when I try on clothes, when I get dressed to go out, when I get dressed to work out, when I decide what pictures to post on Facebook…the first question always is “do I look fat”? That Spartan race that I finished? I felt so strong, so empowered…until I saw the pictures of myself during and after. Then I just felt…fat…again. I guess that’s because I don’t feel fat because I’m so fit (yay) until I see myself through what I think are other people’s eyes (boo).

The thing is, I know how to lose weight. Not only am I a certified personal trainer, I’ve done it before…well, okay, I did it ONE time in my life, but I really kicked ass at it. I lost about 35 pounds (over the course of 2 years) by just getting active and changing my eating habits when I joined a bootcamp. And then I entered a contest and lost 15 more pounds. I got down to a size freaking 10. I won a weight loss challenge!! And you know what? It felt great. 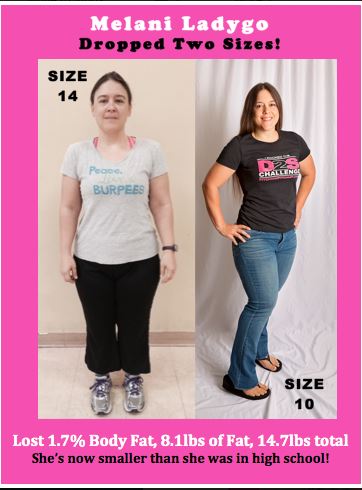 I mean, don’t get me wrong…it was super fun to shop for stuff that was cute instead of stuff that just fits me. And I got a little more daring with my outfits and had fun with that. And, omg, the best part was when I sat for too long on a hard surface, my sit bones kind of hurt…like all my skinny friends complain about! But what wasn’t so fun were my deflated boobs. 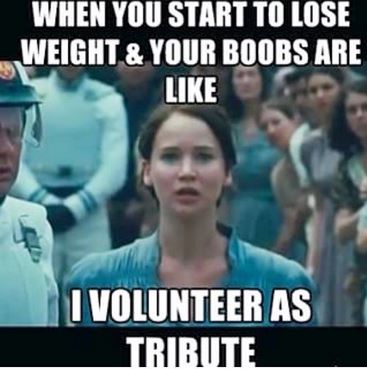 And while my husband totally supported me every step of the way, he also missed my bodacious rack and also found my newer, slender self a little…unfamiliar. He never, ever criticized, but like the low frequency buzz, I could feel it. And as unfamiliar as he was feeling, strangers were, well, familiar. Men noticed me. They flirted. They didn’t care that I was married and not interested. As someone who was used to (and preferred) flying under the radar, it was stressful and annoying.

And what do you know? While I didn’t get back to square one, I seriously flirted with it. The combination of those pictures from the Spartan finish and the looming deadline of a milestone birthday combined to kick me into gear again. I decided to buckle down. I turned my attention back to my nutrition…because as unfair as it feels and as cliché as it sounds, you lose weight in the kitchen, not in the gym. As hard as you train, you can eat (or drink! Alcohol not only has calories but plays with your metabolism in sneaky ways!) away a workout and then some so freaking fast.

But this time, in addition to watching the calories and the carbs and the protein, I made a commitment to also watch my mind. I lost weight for ME the first time, but I started gaining it back again, in part, because of what I felt coming from others. I recognize that if I’m going to make it stick this time, it is critical for me to keep my own goals and emotions and ambitions in the front of my mind…because that’s what you seldom hear…your mindset is such a critical piece to weight loss…hell, to life. It is your secret weapon, or secret villain…choose wisely.

The biggest lesson I’ve learned so far is that it really is a journey, and not a race (sorry, another cliché!)…which sucks because I’m good at races! Short term goals, even if they are hard, are much easier for me. Focus in for two months, watching every calorie and counting every rep…yep, I can do that. Staying present, enjoying life, while maintaining or losing more weight? I’m still figuring that out. But I’m ready for the journey.

Story of and Written by: Melani L.